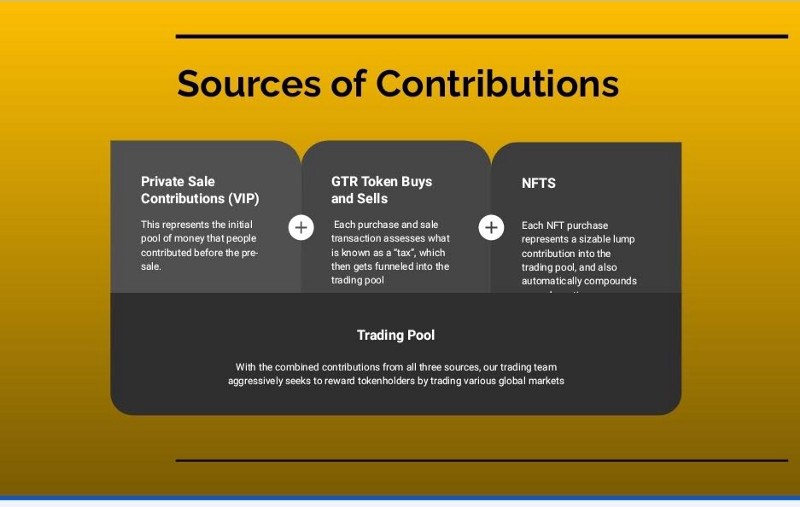 Last week, we held off on elaborating on the tokenomics of the Ghost Trader ecosystem because it really deserves its very own article. As a matter of fact, this may end up being a series before long, where we dive into strategies for new contributors moving forward. For now, however, let us cover the entire ecosystem briefly, to provide a general overview of the project.

In order to understand Ghost Trader, one must understand the structure of the project. Ghost Trader’s mechanics may seem a bit vexing initially, but mostly that results from being a novel and unique project. In reality, the project becomes remarkably easy to understand once we get beyond various issues of nomenclature and familiarity. Included below are some graphics to help visualize how things work.

The total maximum token supply is 100,000,000. There will be no minting of new GTR tokens, and there will never be any more than that number. Each GTR token represents a slice of the rewards stream that the trading team generates every month. To illustrate briefly, if one were to own 1,000,000 GTR tokens, those tokens would entitle the tokenholder to 1% of the total GTR reward generated in a given month. However, this simple illustration assumes that all 100,000,000 tokens are in current circulation. If the circulating supply were, say, 75,000,000, then 1,000,000 tokens would entitle the holder to 1.33% of the monthly reward stream. The current circulating supply is somewhere in the neighborhood of 73,000,000.

Currently, there exist three sources of contributions for the trading pool. Those sources are as follows: VIP contributors, GRT token buy/sell fees, and NFTs. They combine to provide the Ghost Trader himself and his team the liquid capital necessary to perform trades and generate rewards for the entire project. The trading pool is divided into separate sub-pools for purposes of calculating rewards, but the pools trade as a whole so that the trading team can take advantage of trade scaling.

The VIP sub-pool consists of contributions from people who recognized the brilliance of the project early. These people were the early pioneers of the project, those who saw the promise of the vision that the Ghost Trader team presented in the white paper. They provided the early funding for the project to enable the Ghost Trader to begin trading initially. In fact, VIP contributors contributed over 800 BNB to the initial trading pool, and 100% of their contributions funded the trading pool. As a result of their good faith, they were rewarded with VIP tokens — non-tradeable markers, essentially — which represent a fractional claim on the rewards generated by the VIP sub-pool. The VIP holders enjoy a reward split of 65% from profits generated by the trading team. For illustrative purposes, if the trading team generates $100k in profits, and we assume that this profit all were to go to the VIP tokenholders, $65k would then be split between all VIP tokenholders on a pro-rata basis, with the remainder remitting to the Ghost Trader company itself. This essentially means that the Ghost Trader company itself receives 35% of the profit generated from trading those assets. Due to their early involvement in the project while things were still coalescing, the VIP holders enjoy an understandably larger share of profits.

The GTR tokenholders are people who hold the actual Ghost Trader basic token. These are the people who bought tokens during the pre-release or after the token launch went live. During the pre-sale, over 800 BNB more were taken in, providing another large injection of liquid capital to the trading team for the purpose of generating rewards. Trading the GTR token generates buy and sell fees, commonly known in the cryptospace as “taxes”, which then get redirected into the trading pool. Currently there is a 4% buy fee and 8% sell fee. As trade volume on the GTR token increases, so shall the fees generated to boost the trading pool. GTR holders receive a reward split of 50% from profits generated by the trading team. For illustrative purposes, if the trading team generates $100k in profits, and we assume that this profit all were to go to the GTR tokenholders, $50k would then be split between all tokenholders on a pro-rata basis. Similar to the VIP token scenario, the remainder of the profits would remit to the Ghost Trader company.

First, the NFTs auto-compound, meaning it functions without the holder needing to revisit the decision every month if they do not feel the need. Second, because of this auto-compounding feature, the NFT rewards circumvent buy fees to recompound, meaning that NFT holders end up compounding slightly more dollar-for-dollar than someone holding GTR tokens, all things being equal — again, due to not having to pay the buy fees to compound. Genesis NFT holders also receive a slightly stepped-up reward split of 52.5% from profits generated by the trading team. For illustrative purposes, if the trading team generates $100k in profits, and we assume that this profit all were to go to the GTR NFT holders, $52.5k would then be split between all NFT holders on a pro-rata basis. Similar to the VIP and GTR token scenarios, the remainder of the profits would remit to the Ghost Trader company. In the future, new NFT mintings will pay a 50% reward split to holders.

As promised, the mechanics and tokenomics can be easily understood once they are laid out in one place, and accompanied with some clean visuals. Certainly, this article may take a couple of readings in order to grasp the nuance and implications of the entire vision of the project. Note, the team has great future plans to expand functionality moving forward, and things will continue to develop as the team creates more functionality for the entire project. For now, though, this represents the entirety of the Ghost Trader ecosystem as it stands currently.